Thirty-Third Annual Report of St. Brigid’s Orphanage (1889) (presented at Annual Meeting, March 1890). This report is delivered following the death of Margaret Aylward in 1889. The report describes the attendance of the Archbishop (William Joseph Walsh) at the meeting, at which a speech was delivered by Rev. Father John Gowan on the ‘Story of Miss Aylward’s Imprisonment’. It is noted that the children of the Holy Faith school in Coombe sang, and one pupil read an address of appreciation to the Archbishop. It is then noted that the Archbishop delivered a speech on the drawbacks of secular education in poor schools under the National Board, and the benefits of a Catholic education. It discusses issues on the use of religious icons in schools (with reference to the crucifix). The speech further describes the Powis Commission of 1870, and the Forgeries Commission of 1890. It contrasts conditions in the use of icons in both Protestant and Catholic schools in England. It notes the support of Mr. Sexton, M.P. in representing Catholic schools in Parliament. To end, while noting thanks to the foundress Margaret Aylward, the Archbishop also thanks Rev. Father John Gowan. Thereafter, it notes that Rev. Father John Gowan read the annual report, opening with a ‘profound expression of regret and loss of the head that planned the Orphanage, Miss Margaret Aylward’.
The report details the number of orphans; reunification of orphans with parents; orphan adoptions; orphan apprenticeships; the schooling of orphans; and the rearing of orphans. The boarding-out (foster care) system is discussed, and premiums paid to nurses (foster parents) is noted. Protocols for religious instruction and education in general is detailed. It thanks the support of the benefactors and guild associations. The report discusses the work of the Holy Faith schools. Schools are not in receipt of state aid. It provides statistics on attendance; and of children who completed First Communion, and Confirmation. It reminisces on Miss Aylward’s reasons for starting the schools, with reference to the attendance of poor Catholic children at Protestant poor schools. In doing so, it provides an extract from the Sixth Annual Report, whereby it notes the encouragement of the then Archbishop Paul Cullen to set up schools for the Catholic poor.
The report reprints a document found in Margaret Aylward’s desk upon her death; a letter from Rome, acknowledging the work of the Sisters of the Holy Faith. Also, there is a reprint of the speech by Rev. Father John Gowan on the history of the events leading up to the imprisonment of Margaret Aylward in Grangegorman Prison.
A list of benefactors and donations to St. Brigid’s Orphanage and Holy Faith Schools is listed (including clergymen and guild associations). In the appendix is a letter of solicitation for support, donations, and subscriptions. Also, in the appendix is an extract of a pamphlet published by his Lordship the Bishop of Southwark and kindly presented to St. Brigid’s Orphanage, titled ‘Practical Direction and Suggestions as to Appointed Testamentary Guardian.’

Copyright © & Intellectual Property Rights (IPR) belong to the Holy Faith Sisters.
This resource may be used and reproduced (with accreditation) under the following license:
Attribution-NonCommercial-NoDerivatives 4.0 International (CC BY-NC-ND 4.0)

Existence and location of originals 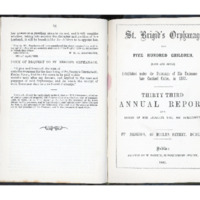